Oil has continued its tumble from its March 2022 high of $131 per barrel down to $82 a barrel. The drop has been in response to weak economic figures from China and the USA which has added to the recessionary anxiety gripping the market.

Furthermore, as Iran edges closer to a nuclear deal, the removal of economic sanctions on the country may be able to provide 2.5 million barrels a day to the global supply. The drop has also coincided with a rebound in equities as the possibility that central banks may soften their aggressive interest-raising regime has entered the market. Further industry data released from the USA outlining their Crude stockpiles due later on Tuesday, may also impact the price in the short term.

The recent drop has pushed the price of both Crude and WTI to 6-month lows not seen since before the Russia and Ukraine crises. On the daily chart, both Brent and WTI are sitting on areas of support between $85-$93 and $83-$90 respectively. The price for both Brent and WTI has also dipped below the 200-day moving average indicating a medium-term bearish shift. The question remains, is this just a retracement, or a reversal of exhaustion? Due to the prices being resting near their area of support and the RSI consolidating between 25-45, this does indicate a possible bounce. If the RSI can break above the recent consolidation/range or 45 and the general price of the commodity can bounce off its support, there may be the potential for buying opportunities. 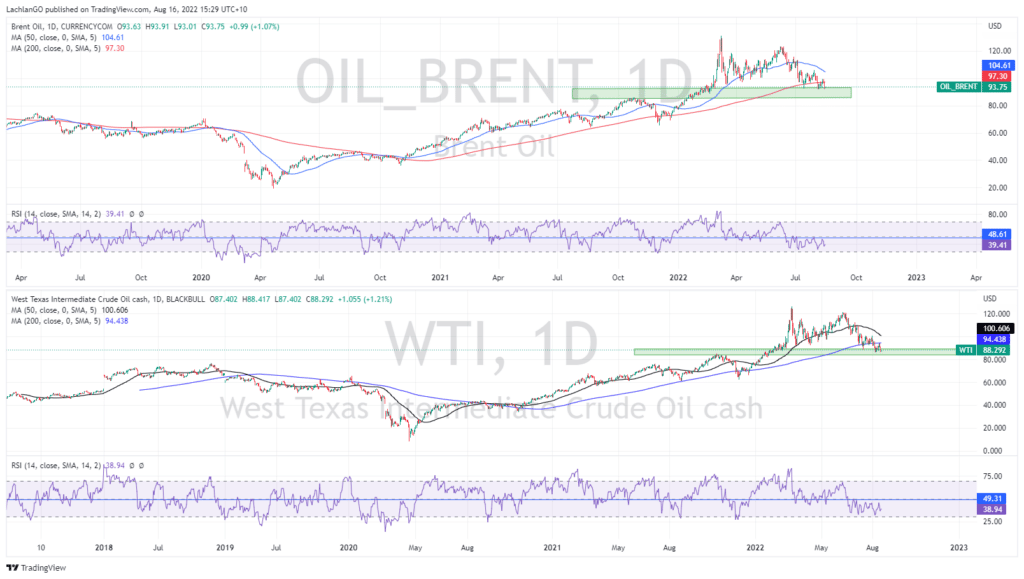 With any trade and especially those involving commodities, there are always external risks to consider that may invalidate the current trading strategy. For instance, if inflation becomes less of an issue and central banks begin to taper their aggressiveness in fighting inflation, the price of oil may begin to slip. Therefore, this is a trade that can in which the utilisation of both technical and fundamental analysis can be done.

Walmart tops expectations for Q2 – the stock is up

Walmart tops expectations for Q2 – the stock is up Walmart Inc. (WMT) announced its Q2 financial results before the market open on Wall Street on Tuesday. World’s largest supermarket chain reported results that exceeded analyst expectations, sending the stock price higher. The company reported revenue of $152.859 billion (up by 8.4% ye...