As the clock ticks for Brexit, Brussels and London seem to be working harder than before on their differences for a last-minute Brexit deal. The headlines in the past 48 hours have renewed optimism that the UK and European Union may secure a deal.

However, even though the negotiations appear to be moving in the right direction and the related parties are keen to get a deal done, there is still some scepticism on the pace of developments ahead of the EU meeting.

If there are enough concessions to allow for a deal, Prime Minister Boris Johson will have a deal to put through to Parliament in a special sitting on Saturday, the 19th of October. The circumstances to call for a Saturday meeting are still not clear and are based on how the negotiations unfold. The recent flexibility on both sides is so far paving the way to the UK Prime Minister bringing a deal back from the EU to table in a special meeting on Saturday. 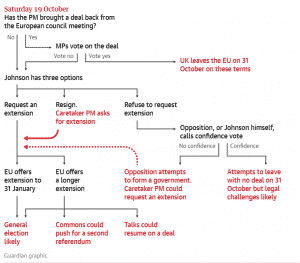 Deal or No Deal

The Prime Minister will be forced to ask for a delay – deal or no deal. In the case of a deal this week, it will be a race against time trying to finalise an agreement and arrange for the draft to pass through the votes to exit the European Union on the 31st of October.

But the delay will be mostly to complete the formalities of a deal and will probably not dampen the recent optimism.

Brexit hopes have steered risk sentiment in the European markets as the three-year-long Brexit saga seems to be coming to an end. It could be exhaustion that has caused both the EU and UK to be more flexible in allowing Brexit to happen.

European indices rose higher while the FTSE 100 closed slightly in the red due to a resurgent pound. Global equities rallied across the board despite growth forecasts from the IMF. According to the IMF, the global economy is growing at its slowest pace since the financial crisis and would hit only 3% this year. 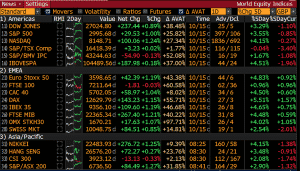 As the UK appears to be on the point of a breakthrough on a Brexit deal, the Pound is soaring and the Sterling has room for more upside movement if Brexit hurdles are cleared. However, in anticipation of more clarity this Wednesday, the GBPUSD pair is in the consolidation phase just below the 1.28 level. 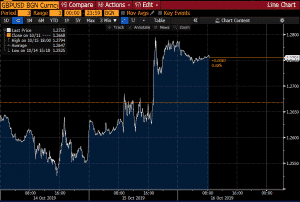 We expect the Sterling pairs to remain volatile ahead of the summit!

All in all, the path of the Pound in either direction would be sharp and volatile. A deal with the EU backed by parliament could send the pair rallying to 1.40 level while a disruptive no-deal outcome could see the pair plummeting to the lowest level seen in 2016.

Mark Austin (LinkedIn) is the Co-Founder of Magnetic Trading, a trading coaching and services business. With experience across prime institutions such as The Royal Bank of Canada and EFG, Mark’s unique insights have helped many discover what it takes to trade with a principled approach. In this episode we covered: Life in Thailand...

Chris Tate is an Author, Trading Mentor, Co-Founder of (Trading Game), and Founder of Talking Trading. With a penchant for applying the scientific...