Investors welcomed the series of positive vaccine updates across the week against the backdrop of the rapid global surge in the number of coronavirus cases. The sentiment in the financial markets swayed between risk-on and risk-off reflecting the uncertainty of global economic growth following more localised lockdowns and social distancing measures in major economies.

Global equities started the week on a strong note following the recent vaccine updates but the momentum tamed amid the elevated concerns of rising virus cases as the week comes to an end. The US share market was also underpinned by the stimulus gridlock in Washington.

Moderna announced that the Phase 3 study met the statistical criteria with a vaccine efficacy of 94.5%.

Pfizer and BioNtech provided another update this week whereby they announced more promising results on the efficacy rate. After conducting the final efficacy analysis in their ongoing Phase 3 study, their mRNA-based COVID-19 vaccine candidate met all the study’s primary efficacy endpoints. The analysis of the data indicates a vaccine efficacy rate of 95%. 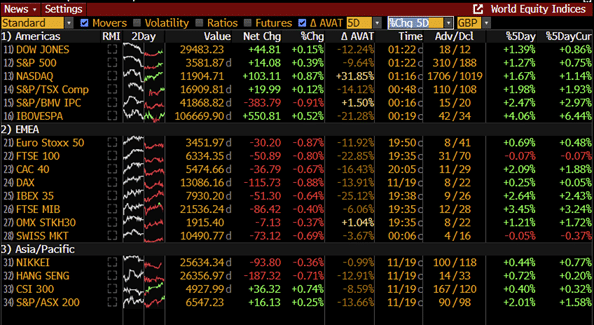 In the forex market, the price action was also primarily driven by the vaccine and virus updates. Major currencies remained mostly within familiar levels. Safe-haven currencies like the Japanese Yen and Swiss franc together with the British Pound were among the best performers against the US dollar while commodity-related currencies were trading mostly on the downside.

The US dollar struggled against its peers this week following fresh daily records on the virus front, mixed economic data, a dovish central bank and a stimulus gridlock. The greenback was unable to follow other safe-haven currencies amid the current environment. 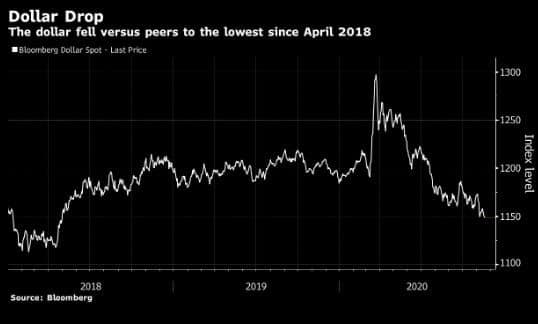 On the economic front, investors digested the mixed data and the prospects of more economic grief in the coming months following more lockdowns and social distancing measures to combat the virus outbreak in the US. 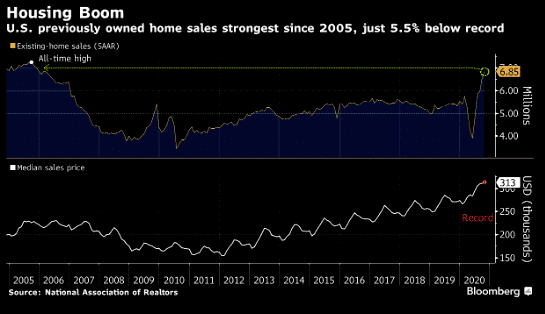 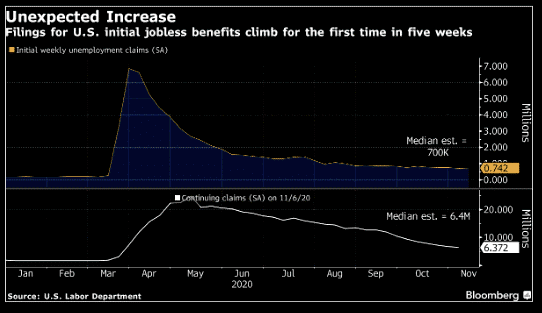 The Aussie dollar was the worst-performing G10 currencies despite the upbeat employment reports. The 6-day lockdown in South Australia might have underpinned the recent rise of the local currency. The Australian economy recorded a strong rise in employment and hours worked in October:

After the ups and downs, the AUDUSD pair was currently unchanged around 0.7275 for the week as of writing. Retail Sales figures may be the next catalyst for the AUD traders.

Amid a relatively subdued economic calendar at the start of the week, the British Pound was mostly driven by the Brexit updates. The headlines around the negotiations were more promising towards the end of the week which boosted the Pound. However, news that an EU negotiator has contracted the virus may delay the negotiations which were at a crucial stage.

On the economic front, the Consumer Prices Index (CPI) 12-month rate was 0.7% in October 2020, up from 0.5% in September. The next event will be the Retail Sales figures. As of writing, the GBPUSD pair was up for the week and trading around the 1.32 level.

The precious metal remained depressed by the recent positive vaccine news and the gridlock in Washington despite the concerns on the virus front.  As of writing, the XAUUSD pair is trading around $1,862.