Weekly Summary – A Biden Presidency and A Republican Senate?

As widely expected, the focus was on the most-awaited political event of the year – US Presidential Election. It is the global event that may potentially affect the global economy, alliances and trade agreements. Unlike any presidential election, the attention was revolving more towards the focus for stimulus and the stalemate in Congress.

Despite an unprecedented health and economic crisis, the 2020 election reflects a deeply polarised nation similar to the 2016 election results. As of writing, there are still some key states yet to be claimed: 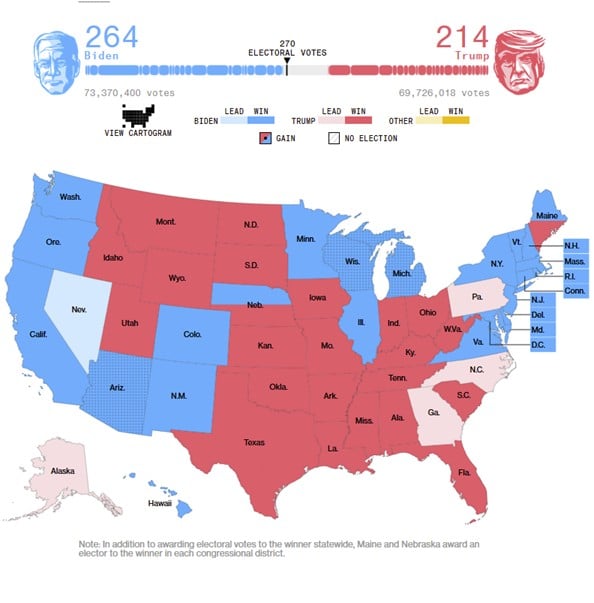 The recent mail-in ballots being counted in the state of Pennsylvania and Georgia have narrowed the gap between the two candidates. In anticipation of the key swing states, Democrat Joe Biden is inching closer to the 270 Electoral College votes needed to claim the presidency.

With millions of votes yet to be tabulated, it might take more time before the election results are announced, one thing for sure, the hopes of a blue wave “clean sweep” in the Senate may be unlikely and the US may face the status quo on the policy front.

Investors are pricing in a Joe Biden Presidency and a Republican Senate which means that there might not be a major shift in major policies given the gridlocked Congress. However, while markets are unsure about the size and timing of the second coronavirus relief package, an agreement on a stimulus package will eventually take place despite the stalemate in Congress.

Despite the worrisome number of coronavirus cases across Europe and the US, global equities rallied at the prospects of a Joe Biden Presidency and a divided Congress.

Even though the virus spike in Europe is deeply concerning and recent data showing a deterioration of economic activity within the region, European stocks climbed higher on the possibility of a divided US government and more stimulus for the UK economy. 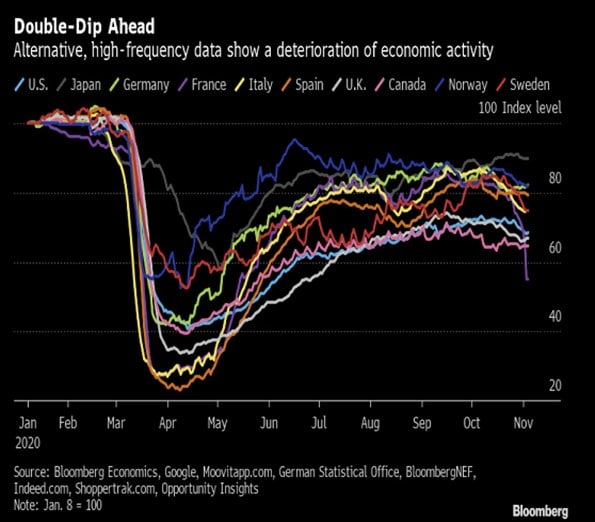 Tech giants like Facebook, Alphabet, Amazon, Microsoft and Apple rallied on the prospects of fewer regulations to tighten corporate America. Nasdaq Composite rose by nearly 9% since the start of the week lifted by the outperformance of the tech industry leaders.

In the forex market, the price action was also mainly geared by the US election. While the results are yet to be conclusive, the Trump campaign has already launched legal actions against some states, requested a recount for at least one state and claimed election fraud. As of writing, market participants are pricing-in a Joe Biden win with the status quo in the House and Senate.

With a gridlocked Congress, the attention has switched to the Federal Reserve and other central banks meetings. Major G10 currencies were stronger against the US dollar given the uncertainties for the US economy.

US Dollar – The Fed and Election Results

The US dollar has remained under pressure throughout the week. As of writing, there is no clear winner for the Presidency but it appears that the Congress will remain divided. On the Fed side, the Committee decided to keep the target range for the federal funds rate at 0 to 1/4 percent but highlight the uncertainty depending on the path of the economy due to the course of the virus.

“The ongoing public health crisis will continue to weigh on economic activity, employment, and inflation in the near term, and poses considerable risks to the economic outlook over the medium term.”

As widely expected, the Reserve Bank of Australia cut interest rates to a historic low from 0.25% to 0.1% with the following package:

After an initial selling season when the RBA slashed interest rates, the AUDUSD pair turned mostly positive as the Board is likely to keep the new lower level of interest rates in place for an extended period. No further reduction or negative interest rate is therefore not on the table for the near future. On the economic front, AiG Manufacturing Index, Retail Sales, Building Permits and Trade balance figures were also above expectations. As of writing, the AUDUSD pair is currently trading above the 0.72 level.

The Bank of England’s Monetary Policy Committee (MPC) voted unanimously to maintain Bank Rate at 0.1% but revised its QE program. The Committee voted unanimously to keep the existing programme of £100 billion of UK government bond purchases but also decided to increase the target stock of purchased UK government bonds by an additional £150 billion.

Despite the downbeat new forecasts of the economic contraction as the UK entered a one-month lockdown, the QE boost and more aid from the government announced on Thursday helped the Pound to climb higher. 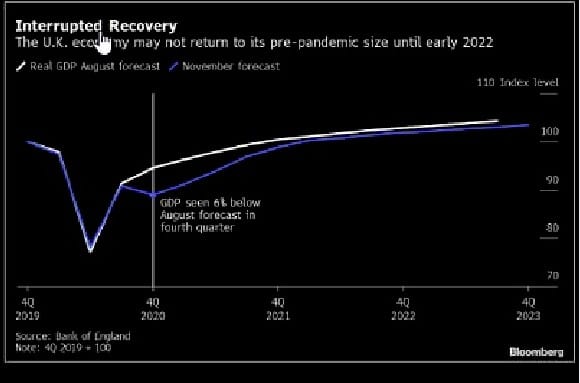 The GBPUSD pair rose from a low of 1.2930 to a high of 1.3155 on Thursday following the dual support from the BoE and the UK government.

On Friday, crude oil prices were seen paring gains made earlier this week. The energy market found some support on the back of the broad optimism in the equity market and bullish API and EIA report amid the ongoing uncertainty on the demand side.

Even though the timing and size of the US stimulus package remain the focal point for gold traders, the precious metal rallied on a weaker US dollar. As of writing, the pair retreated from a high of $1,952 seen on Thursday and is trading around $1,938.