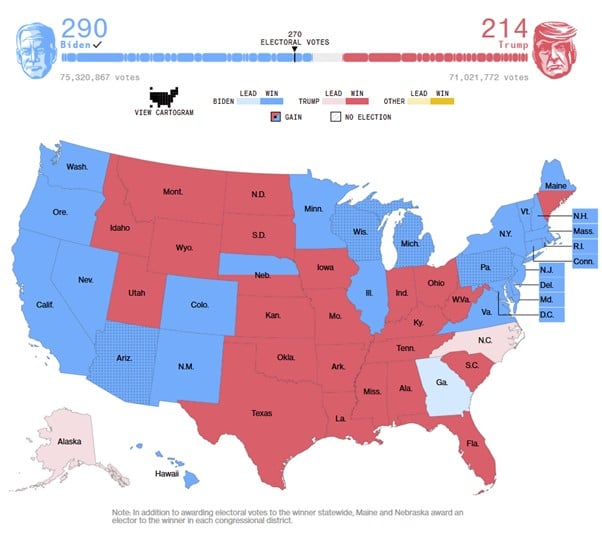 A strange return to calm? Recently, the financial markets were rattled by the uncertainty around the US elections, the rapid resurgence of the coronavirus outbreak in major economies and Brexit woes.

Markets are taking-in a Joe Biden Presidency and a Republican Senate. Even though there are still two outstanding seats for the Senate, the odds are tilting towards the Republicans rather than the Democrats. Generally, the Republicans are supposedly considered as more “market-friendly” compared to Democrats.

The Republicans encourage tax cuts and believe in an income tax system that does not unfairly target those who create jobs and wealth while Democrats support a more progressive tax structure to provide more services and reduce economic inequality by making sure that the wealthiest Americans pay the highest amount in taxes.

The likelihood of raising taxes or implementing policy changes will likely be tempered by a divided Congress. The stock market is finding some relief on the status quo on the policy front. Tech giants like Facebook, Alphabet, Amazon, Microsoft and Apple rallied on the prospects of fewer regulations to tighten corporate America.

Attention will be on the possibility of some fiscal stimulus during the transition period.

On the geopolitical front, a Biden presidency may add pressure on the UK government to strike a Brexit deal. The recent optimism seen with respect to the negotiations has helped the UK markets and the British Pound to cast aside some of the stricter lockdown measures put in place following the rapid spread of the coronavirus outbreak. Investors will likely continue to monitor the possibility of a deal in the days ahead.

Despite the downbeat new forecasts of the economic contraction as the UK entered a one-month lockdown, the QE boost and more aid from the government announced last week provided some support to the UK economy.

The UK GDP will be eyed this week to see how much the economy rebounded after a contraction of -19.8% in the second-quarter. The figures will probably be assessed against the expected damage in Q4 given the current lockdown measures and restrictions.

After the Reserve Bank of Australia cut interest rates to a historic low from 0.25% to 0.1% and agreed to the purchase of $100 billion of government bonds of maturities of around 5 to 10 years over the next six months, the spotlight will be on the RBNZ Interest Rate Decision.

The energy market found some support on the back of the broad optimism in the equity market and bullish API and EIA report last week amid the ongoing uncertainty on the demand side following more lockdown restrictions. Additionally, a Democratic Presidency might be another challenge for the oil market. Oil traders will likely rely on OPEC’s commitment to production cuts during those highly uncertain times. As of writing, WTI Crude oil (Nymex) and Brent Crude (ICE) were trading at around $38.20 and $40.49 respectively.

The precious rallied mostly on a weaker US dollar and the hopes of some sorts of US stimulus relief package during the transition period. The timing and size will remain the focal point for gold traders. As of writing, gold was trading around $1,955.