Week Ahead: All time highs for US markets, China drives oil rally and Bitcoin boost.

World equity markets finished modestly positive for a week sparse of economic news. US markets again hit all time highs on the back of strong corporate earnings, continued optimism in fiscal stimulus and COVID progress as the US infection rate eased to its lowest level since October.

The NASDAQ outperformed with Twitter (TWTR.NAS) continuing the good run of earnings coming from the tech giants in recent weeks.

Disney (DIS.NYSE) surged to all time highs after reporting strong performance in Q1, despite the company’s theme parks in California having been shuttered for the best part of a year.

Entering the last week of Q1 corporate reporting we have Walmart (WMT.NYSE) reporting on Thursday, this paired with US retail sales , released on the same day will give a good indication of US consumer demand recovery. 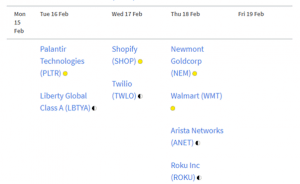 The Australian Market finished slightly down on a week with no major economic announcements. This week we have the employment change and unemployment rate released on Thursday. These figures will be of extra importance with rolling back of JobSeeker payments scheduled for March in what some social advocacy groups are calling a “national crisis”.

Zip Pay (Z1P.ASX) was one shining light, rallying 25% and continuing the surge higher of recent weeks. 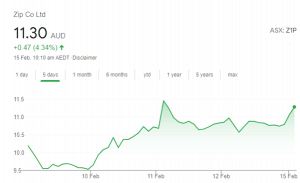 The US dollar index finished down 0.5% weakening against all major currencies with the exception of the NZD.

The Aussie continued its impressive rallies after the dip preceding the RBA’s surprise announcement of its bond buying QE programme at the start of the month. A weak US dollar and record iron ore and copper prices are driving it back to the important 78c level.

AUDUSD has experienced strong resistance at these levels this year, the employment report on Thursday will be an important Indicator as to whether the Aussie can break through. 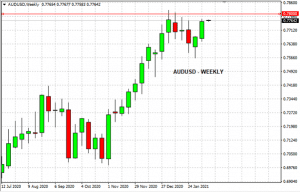 US Crude Oil continued its strong rally breaking the $60 USD a barrel mark, with prices now back in line with pre-pandemic levels.

China’s rapid economic recovery from the pandemic has been cited as the single most bullish factor for oil prices at the moment.  China’s January crude oil imports averaged 11.12 million bpd. This was up by more than 18 percent from the December average.

Weekly US Crude inventories will be released Friday with the last 3 weeks having much larger draws than expected. Eyes will be on the figure to see if oil demand is continuing to strengthen.

Bitcoin continued its surge upwards to all time highs as news that an investment arm of Morgan Stanley is considering adding Bitcoin to its list of possible trades.

This comes on the back of a recent Tesla announcement of investment in the cryptocurrency and could indicate a coming broader uptake of Bitcoin in corporate investment circles. 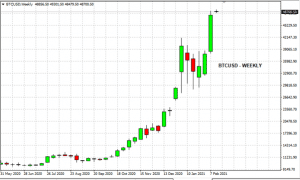 Equity markets US Equity markets started strongly with a post Presidents Day holiday bump, only to fade during the session with only the Dow 30 managing to keep in positive territory and hit another record high.  It was a quiet night on the news front with nothing released to drive the markets. To gauge the progress of the US economic recovery...

GBPCAD – Hourly Individually, both the British Pound and the Canadian Dollar have surged in recent trading sessions, appearing relatively strong ...