US markets were mixed on Thursday night as repositioning continued after the Feds hawkish statement earlier in the day. The NASDAQ closed within striking distance of all-time highs while the Dow posted a fourth straight session of losses. 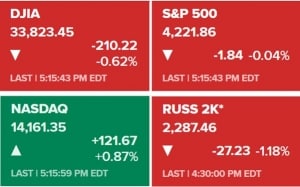 Technology stocks rallied during the session as traders piled back into treasuries pushing yields lower after the sharp spike higher seen after the release of the Feds policy statement Thursday morning.

Adding to the choppiness, the weekly jobless claims report released before the market open showed an unexpected increase in unemployment filings, highlighting the still fragile US economic recovery.

World markets were fairly mixed over the week with European markets outperforming on optimism in increasing vaccination rates resulting in economies opening up boosting equity markets. With the continued shutdown of one of China’s busiest ports, Yantian saw Chinese markets under pressure.

The RBA released its minutes from the rate meeting earlier in the month. They showed that while the RBA acknowledged “the global outlook had improved over recent months and risks to the global economy had become more balanced” they warned that “Despite these positive developments, the global recovery had been uneven and this would continue to be a feature of the outlook for some time”

They also reiterated their projection that real inflation would not be consistent in the target band until at least 2024.

They were no surprises from the SNB as they announced they would maintain its expansionary monetary policy to support the Swiss economy in its recovery and that it will continue to intervene in the FX market to weaken the franc. 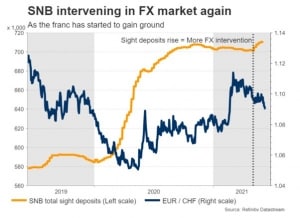 In one of the most watched FOMC meetings in recent times, the fed took a surprisingly hawkish tone on the back of recent elevated inflation figures and good progress in the US economic recovery.

While monetary policy was unchanged the updated forecasts signalled the Fed is not so confident in their transitory inflation narrative. With growth also revised up the Fed indicated the market should brace for 50bp of rate hikes in 2023 with the prospect of an earlier QE taper than previously forecast.

The hawkishness of the Fed’s statement somewhat surprised the market with bond yields and the greenback surging higher and equity markets sliding on the announcement.

Major FX pairs meandered along in a sideways market early in the week with all eyes on Thursday’s FOMC statement. After the hawkish surprise of the Fed’s tone, unsurprisingly we saw the greenback soar and come into the last day of the trading week as the top performing major currency. 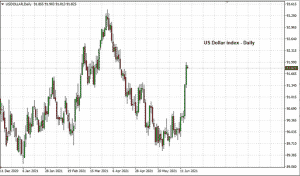 With the catalyst of a resurgent US Dollar on the back of the FOMC policy meeting, AUDUSD has broken the tight trading range it has been trading in for the last 2 months.

Pressure on commodity prices due to possible Chinese regulator interventions and a dovish RBA also weighed on the Aussie which is now testing its 2021 lows. 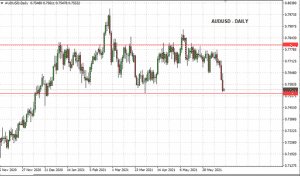 Equity Markets US equity markets took a dive on Friday as turbulence in the markets continued after the US Federal Reserves hawkish pivot on Thursday. The Dow Jones shed over 500 points or -1.58% as investors mulled the fallout from the Feds policy shift. World equity markets followed the lead of the Wall st with significant drops seen across t...