Stimulus euphoria leads to all time highs, a new US administration and Bitcoin bust

We had an eventful week on global markets with the inauguration of a new US administration and a dovish stance from the European Central bank fuelling hopes of extended fiscal stimulus in the new year.

Risk appetite got a boost this week from a push by US authorities for nearly $2 trillion in additional spending and plans to jumpstart a federal response to the COVID pandemic.

US equity markets had the best post inauguration performance since the 1980’s driving the S&P 500, Dow Jones and NASDAQ indices to record highs.

The NASDAQ was also helped along by big beats from Netflix and Intel who reported earnings this week. 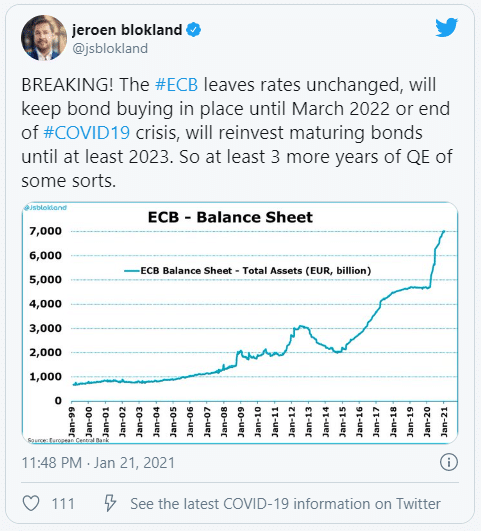 With Executive Orders from the new US administration seeking to accelerate the rollout of vaccines and the seeming peak in US COVID cases there was optimism this week from major Wall St analysts that we could be seeing “the beginning of the end of the COVID crisis” in the US. 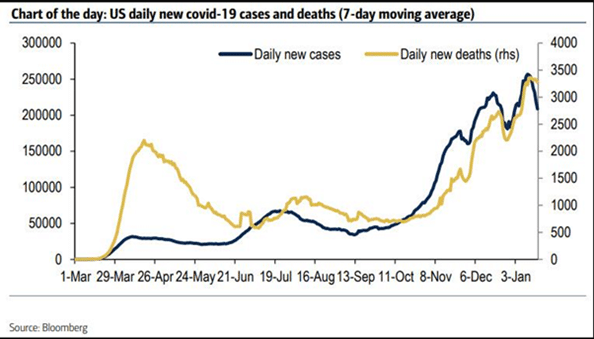 Goldman’s top economist Jan Hatzius,  writes that “a vaccine-driven reduction in hospitalizations is likely to kick off the growth rebound through relaxed restrictions and some reductions involuntary consumer social distancing.”

While record planned US stimulus helped push equities higher it also created a headwind for the US Dollar which continued its downtrend. All major currencies performed strongly against the greenback this week.

AUDUSD strengthened this week driven by US dollar weakness and a better than expected unemployment rate of 6.6% indicating continued recovery of the Australian economy from the COVID economic shock. AUD is trading in a tight range and has managed to hold the important 0.77c support level.

Spot gold (XAUUSD) had a strong week on the back of US dollar weakness and stimulus hopes, it bounced strongly from the 1820 -1800 support zone making 2 week highs and being up around 2% for the week at time of writing.

Negotiations in the US on the particulars of the proposed stimulus bill and positive or negative news on regarding COVID are expected to play a part in the next few weeks of future price movements. 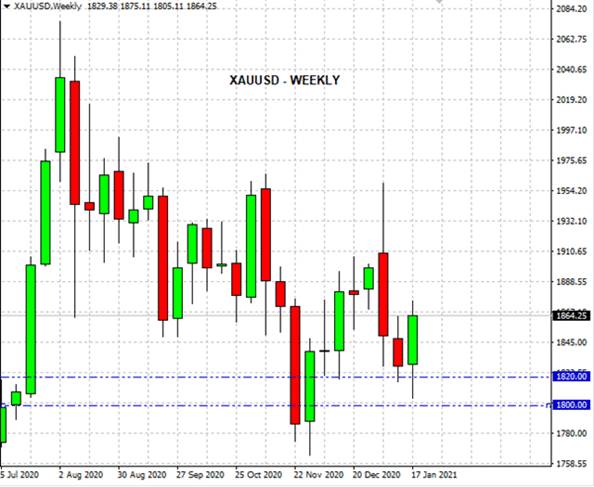 It was a tough week for Cryptos with flag bearing tokens Bitcoin and Ethereum among others sliding dramatically after recent stellar rallies.

Bitcoin dropped 10% alone on Thursday and down almost 20% on the week.

The drop seems to be a long overdue correction and sustained profit taking, it wasn’t helped on Thursday by a report in a trade blog suggesting that there had been what’s known as a double purchase, where the same “coin” is used in two separate transactions. This rumour went viral casting doubt on the security of the Bitcoin blockchain. Industry veterans and people familiar with blockchain technology downplayed the notion, but with so many new investors with a poor understanding of blockchain technology the damage was done.

From a chart technician’s point of view, Bitcoin broke the lower barrier of the wedge pattern it has been consolidating in and has headed to the important 30000 support level. 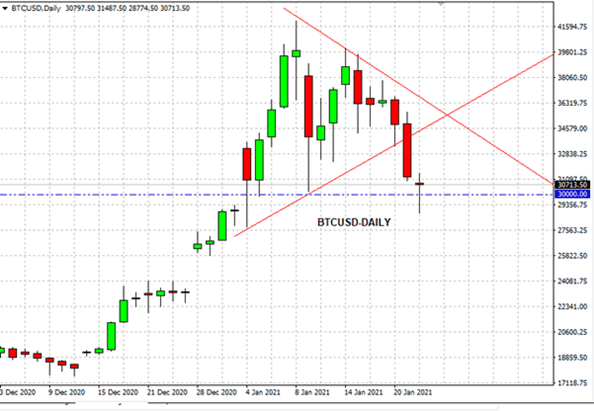 Week Ahead: US Earnings season, FOMC and weaker than expected Oil demand

Major US, European and Australian Indices made modest gains last week, despite a Friday sell off on Wall St. Traders will have no shortage of news to digest this week, with the Federal Open Market Committee’s January policy meeting, major tech company earnings, US GDP figures and Australian CPI. Equity Markets US equity traders will have a sl...

Equity markets US markets pushed decidedly higher last night with the S&P 500 (US500) hitting record highs on the optimism that federal spending ...