Global markets see-sawed from record highs to steep declines in an eventful month that saw a new US administration sworn in, promises of record US stimulus and the FOMC spoiling the party somewhat.

Major Indices in the US and Europe saw record highs this month on hopes of fresh stimulus from the US and signs of global economic recovery from the COVID pandemic -induced recession. As the month went on though, it became clear neither of these was a certainty: we saw prices whipsaw and a decoupling of major Indices with some outperforming while others struggled. 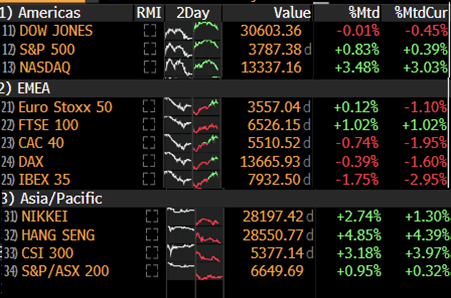 January saw record highs reached in the Dow Jones, S&P 500 and NASDAQ indices. With a new administration promising unprecedented stimulus we saw the best post inauguration day rally in 40 years – the euphoria waned approaching the end of the month and with one trading day left both the Dow and S&P are flat for the month.

Asian markets performed well in January with the big winner being the Hang Seng (HK50), up almost 5% month to date.

Hong Kong’s GDP likely contracted in 2020 for the second straight year, caused in no small part by pro-democracy protests in 2019 and COVID in 2020. But with a big GDP rebound forecast for 2021 and hunger from Chinese investors for stocks such as China Mobile and Xiaomi (whose US listings are in limbo), the Hang Seng is forecast to be a top performer this year. 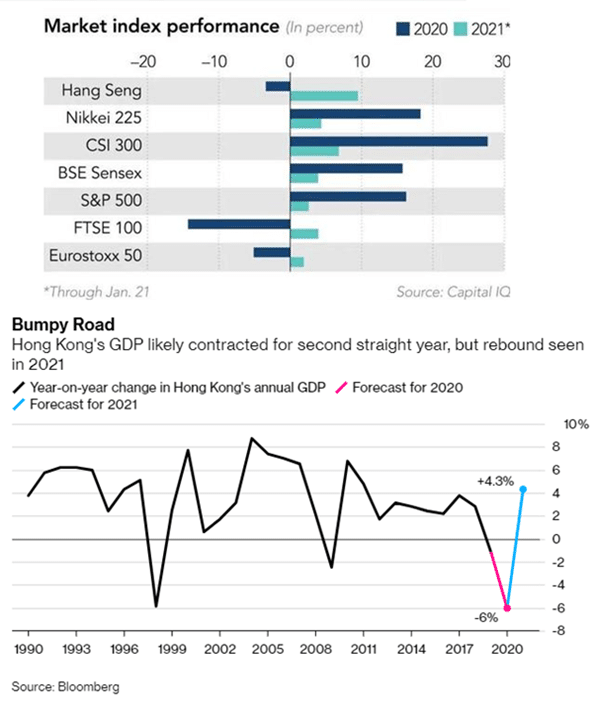 The ASX 200 put in a decent month, rallying over 1%. With lockdowns eased across the country and continued government measures to stimulate the economy we saw impressive rebounds in employment figures and CPI readings this month, fuelling hopes we’re in an economic recovery phase and on the road back to pre-COVID economic activity. 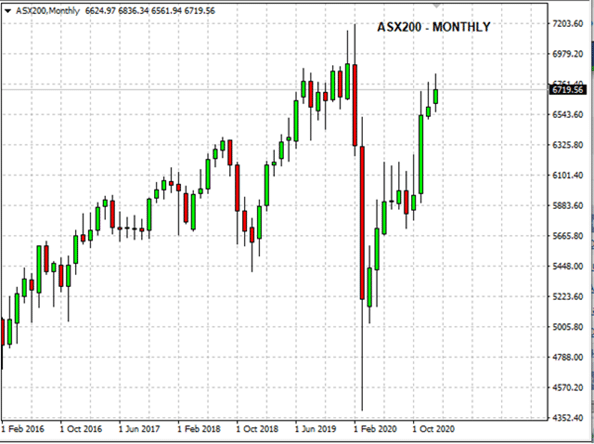 January saw the US Dollar strengthen with the Greenback outperforming all major currencies with the notable exception of the GBP.

The US Dollar index has had a rough 12 months with a COVID ravaged economy seeing the greenback as being less of a safe haven.

Vaccine rollouts, a new administration promising to strengthen the economy with major stimulus, a less dovish FOMC statement and a technical bounce off support levels established in 2018 all combined to get buyers interested in the USD.

2021 is expected by analysts to be the year of the vaccine, in which the currency of the economy that is unlocked first is the currency that is sought.

With the UK on track to vaccinate around 14 million people against COVID-19 by the middle of February, analysts believe the “Sterling might find itself in the unusual position of being a hero among major currencies” if this is achieved.

Adding to that, according to The CFTC’s most recent Commitment of Traders Report, traders are piling into the pound after a year of being net short GBP. 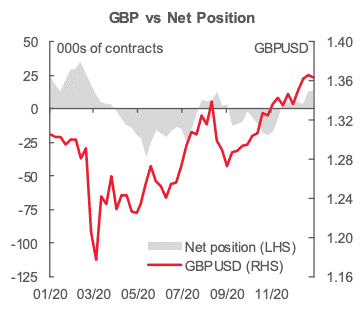 After an eye-watering 3 month rally January is the month where bitcoin momentum stalled.

January saw a range including an all time high of $42,000 USD to a low of around $28,000, showing that while upward momentum has stalled, volatility is still high.

Analysts are split on the cause of Bitcoin’s stalled momentum, with opinions ranging from a less dovish FOMC reducing incentives for those buying BTC as an inflation hedge to traders taking profit ahead of the Jan. 29 futures’ expiry, where $4.9 billion worth of futures contracts will expire.

Bitcoin still has some institutional interest with legendary Bridgewater founder Ray Dalio indicating his interest and a warning regarding the cryptocurrency to his clients. 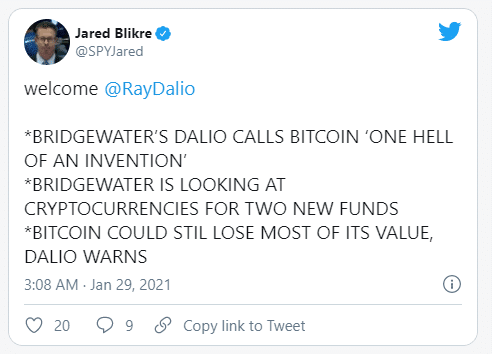 Spot Gold prices dropped around 3% January with the impressive rally of the first half of 2020 well and truly stalling at these levels.

The safe haven rally seems to be over with gold price movements in line with the broader market and highly inversely correlated with US dollar strength/weakness.

This is expected to be the case going forward if economies improve and economic growth returns to pre-COVID levels during 2021 as forecast. 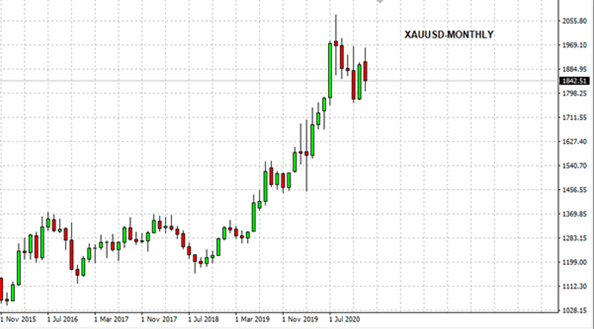 It has been an eventful week over in the United States this week. Some of the major companies, including Microsoft, Apple, Facebook, and Tesla announced their latest earnings. The Federal Reserve kept their interest rates unchanged at 0.25%. We also saw the US GDP expand by 4% in Q4 of 2020. However, these were not the most talked-about events t...

Equity markets US and European Equity markets suffered a considerable drop last night with the S&P 500 (US500) posting its worst session since Oc...