It was another mixed performance in the global stock market on Tuesday. European stocks were mostly under pressure while the US share market ended with modest gains ahead of the run-off elections results. In the European markets, while oil and gas stocks rallied on the back of a compromise regarding production cut, investors were concerned of more severe lockdown restrictions across Europe and the speed of the coronavirus vaccine deployment. 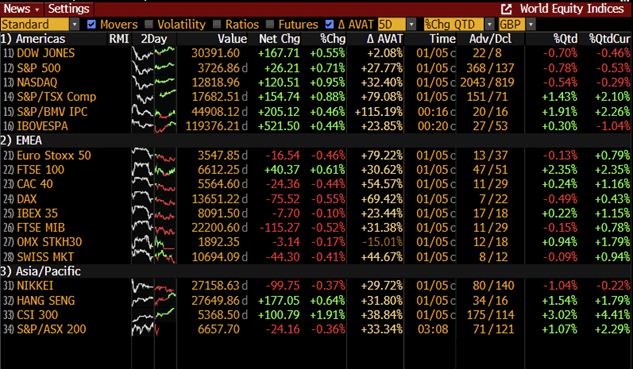 Major US equity indices recovered some ground and ended in positive territory after erasing more than 1% on the first trading day of the new year:

In the FX space, major currencies were stronger against the US dollar. The Antipodeans and commodity-linked currencies like the Australian, New Zealand and Canadian dollar rallied lifted by higher commodity prices while the British Pound and safe-haven currencies posted modest gains.

While the Tuesday’s 13th OPEC and non-OPEC Ministerial Meeting acknowledged the need to gradually return 2 mb/d to the market, with the pace being determined according to market conditions, it reconfirmed the decision made at the 12th ONOMM to increase production by 0.5 mb/d starting in January 2021, and adjusting the production reduction from 7.7 mb/d to 7.2 mb/d. However, the crude oil prices buoyed on the surprise announcement from Saudi Arabia – they would voluntarily cut an additional 1 million barrels per day in February and March above its current quota while all while OPEC’s allies get to ramp up production. As of writing, WTI Crude oil (Nymex) and Brent Crude (ICE) were trading at around $49.75 and $53.60 respectively. 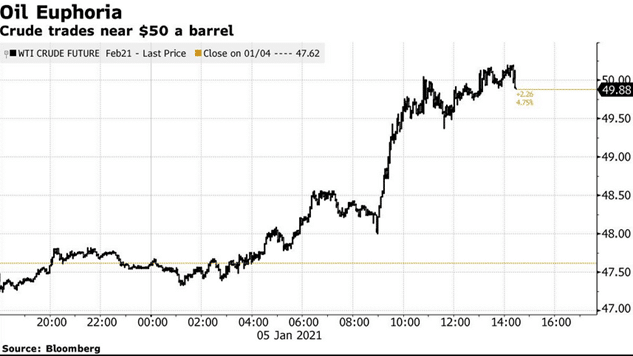 The precious metal continued its rally and edged higher above the $1,950 mark. As of writing, the XAUUSD is consolidating within a tight range around that level.

EURUSD- Point & Figure EURUSD- The overall weakness of the US Dollar continues to dominate much of the FX markets at this stage. Despite a slight uptick in USDJPY this afternoon, the longer-term picture is starting to suggest more of the same, particularly against a much stronger Euro. In September, Goldman Sachs mentioned a 12-month price ...

Pfizer (PFE)- Daily PFIZER - Before Christmas, the pharmaceutical giant Pfizer drew much speculation in the market once it became the first co...