Earnings reports and further optimism over Brexit triggered a rebound on Wall Street. Risk sentiment has improved overnight even though the IMF made a fifth-straight cut to its growth forecasts. 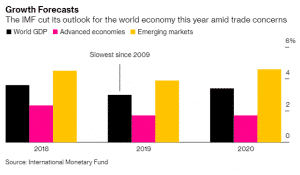 The first batch of earnings report was bullish enough to calm nerves regarding the global slowdown. Only 2 companies- Goldman Sachs and Wells Fargo missed estimates out of the 11 S&P500 companies that reported earnings before the bell on Tuesday. 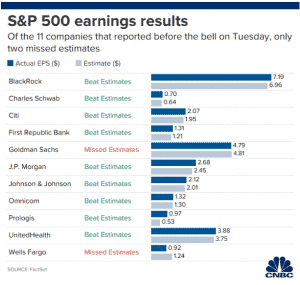 It is a good start and does not necessarily change the narrative of the global slowdown, but it brings some reassurance than probably the backdrop is not as bad as investors feared.

Major US equity indices were broadly higher and finished the day with gains around 1%:

As investors await for the next meeting to finalise and officialise Phase 1 of the trade deal between the US and China, the earnings reports and Brexit are steering up the price action in the markets.

In the FX market, the Dollar dollar was mixed against its counterparts leading up to the US session as risk sentiment improves over strong earnings report and trade news. The comments coming from China’s foreign ministry that “China and the US are on the same page and have no difference in the stance on reaching a trade deal” added to the overall optimism.

The final countdown for Brexit means that the British Pound remains on traders’ radar. This week will be a decisive week which will determine whether Britain exits the European Union as planned on October 31 or Brexit will be delayed. As the deadline fast approaches, Britain and the EU appear to be making more progress on a draft Brexit deal than ever before. However, there is still some scepticism that it will be ready ahead of the European summit which will start tomorrow.

The GBPUSD has been on a rally in the last few trading sessions as hopes of a Brexit deal boost the Sterling pairs across the board. The pair rose above the 1.27 level and has consolidated just below the 1.28 level in anticipation of a deal just in time for Brexit.

We expect the Sterling pairs to remain volatile ahead of the summit!

The Aussie dollar was unable were unable to gather strength as the release of the RBA minutes in the Asian session confirmed that the policymakers are ready to cut interest rates before the year ends to support the economy even though such low interest rates risk putting more pressure on the housing market.

The AUDUSD pair is trading lower at 0.6750 in a bearish trend. However, the pair has also formed a symmetrical triangle and stuck in a tug of war between the buyers and sellers. Traders to watch any significant breakout to the downside for a sell trade. 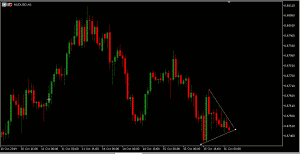 Oil prices struggled to benefit from positive headlines and nor geopolitical tensions that should have supported price recovery. As of writing, WTI and Brent Crude are trading in the vicinity of $52 and $58 respectively.

A strong risk appetite triggered by earnings and Brexit hopes sent the Gold on the offer. The yellow metal plummeted to $1,480 and is now consolidating in a tight range. The prevailing risk-on mood and the return from public holidays which means that investors were catching up on positive headlines weighed on the XAUUSD pair and at the $1,480 level, sellers should be prudent before positioning for any further depreciating move. Traders to monitor concrete developments on the geopolitical front and market-moving economic releases which were low at the start of the week.