The electric vehicle industry has had a tough few weeks with the global chip and battery shortages affecting electric vehicle manufacturers around the world. Despite that, Tesla delivered 184,800 vehicles in Q1 of 2021, exceeding the number of vehicles produced (180,338). The deliveries consisted of 182,780 Model 3 and Model Y. The rest (2,020) were made up by Model S.

”Our net income and cash flow results will be announced along with the rest of our financial performance when we announce Q1 earnings. Our delivery count should be viewed as slightly conservative, as we only count a car as delivered if it is transferred to the customer and all paperwork is correct. Final numbers could vary by up to 0.5% or more. Tesla vehicle deliveries represent only one measure of the company’s financial performance and should not be relied on as an indicator of quarterly financial results, which depend on a variety of factors, including the cost of sales, foreign exchange movements and mix of directly leased vehicles” – statement read on the company’s website following the latest delivery numbers. 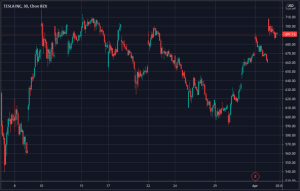 With the Tesla reporting strong numbers for Q1, the price target was also increased by Wedbush analyst Dan Ives. Ives lifted his price target on the stock to $1,000 a share from $950, with a “bull case” level of $1,300.

“In our opinion, the first quarter delivery numbers released on Friday was a paradigm changer and shows that the pent-up demand globally for Tesla’s Model 3/Y is hitting its next stage of growth as part of a global green tidal wave underway,” Ives said.

“With a green tidal wave kicked off by Biden last week in the US, and global EV demand skyrocketing going after a $5 trillion (total addressable market) over the next decade, we believe these delivery numbers are a paradigm and sentiment shifter for the space going forward.”

Markets Eager To Resume As the Easter holidays fade, we quickly saw a market resurgence of traders looking to resume normality. Perhaps one of the more stand-out movers during today's London session was none other than the Pound Aussie cross (GBPAUD). Following the Reserve Bank of Australia's announcement to hold interest rates at 0.1%, the recent...

It’s the beginning of a new month which means that the Non-Farm Payroll figures will be released this week by the US Bureau of Labor Statistic...