With more and more people getting the jab across the world, the chance of side effects becomes more likely. We have already seen the AstraZeneca vaccine being suspended for use for in few countries. Today, it was announced that the US agencies are calling to pause the Johnson & Johnson vaccine rollout after reports of extremely rare blood clot cases.

Following the FDA and CDC advice, all federal sites in the US have stopped using the vaccine until further investigation.

European Union and South Africa have also confirmed that they will temporally stop the rollout of the Johnson & Johnson jab.

The share price of Johnson & Johnson was down by around 1.34% following the latest news on their vaccine, trading at $159.48 per share the close. The stock is up by 1.57% year-to-date. 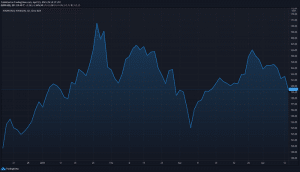 JPMorgan and Goldman Sachs Q1 numbers are in

JPMorgan and Goldman Sachs reported their Q1 earnings before the opening bell on Wednesday – both beating analysts' forecasts. JP Morgan & Co JPMorgan reported a total revenue of $32.3 billion (up by 14.3% year-on-year) in Q1, above analysts' forecast of $30.52 billion. Earnings per share were reported at $4.50 vs. $3.05 estimate. Ja...

Equity markets US Equity markets took a breather overnight with all major indexes drifting modestly lower after the S&P 500 and Dow logged fres...