Is it time to Capitalise on Short Squeezes ?

Is it time to Capitalise on Short Squeezes ?

Short Squeezes are one of the interesting price action patterns that can occur in the market. They can provide It can provide explosive momentum trading opportunities that can go on for days. They can provide trading opportunities for scalpers, intraday, and swing traders.  What actually is a short squeeze and why do they occur? To understand a short squeeze it is important to go back to the basics of trading and understand what an actual short is and why market participants go short on a product.

What is a short?

A short is a position that a market participant takes when they expect the price of a market product to go down. This can include but is not excluded too, Securities, Commodities and Forex.

A trader may take a short position because they believe a company is overvalued, a currency will go down in value due to economic factors, to hedge or for a number of other reasons. Short positions can be taken in a range of ways, however, the most common method for shorting a CFD is quite simple. It involves borrowing units to sell with the short holder having to buy-back the units at a lower price and pocketing the difference.

The mechanics of a short squeeze.

Due to the nature of a short position which requires a buying back of the stock to both close the position and lock in profit a trader will inevitably have to buy-back or close their position at some point. This subsequently drives up the price. Most of the time in a trending market this process works without any issues. However, if the price stops falling and consolidates or to a stage where the market starts to see value in the price again, large short holders may decide to close out their position. If big positions or institutions close all at once it can create an avalanche effect.

Indicators of a short squeeze

Squeezing in the current market

A short squeeze can represent a great opportunity to profit for traders. They can often be explosive moves and last for days. This means that whether you are a swing trader, day trader, or a scalper anyone can capitalise on a squeeze. In addition, with the current state of the market having one of its worst first half of the years in history, with bearish sentiment being very high. The Nasdaq in particular and growth stocks in particular have seen their value smashed. As big short positions have been taken at some stage they will have to be closed and if the market can rally, then this phenomenon may become more regular.

For instance the company ZIP a strong player in the Buy Now Player Sector had seen its share priced reduced to a fraction of its peak prior to just a few weeks ago. However as seen in the chart below, a shift in volume was the first signal that the stock was about squeeze and shift strongly to the upside.

In this instance, ZIP on the weekly chart saw a massive jump in volume, followed by an even larger jump in volume the following week. Importantly ZIP, according to (Shortman.com.au) had a short % of 7.34 on July 1 2022, prior to the breakout. Looking at the daily chart underneath, the sheer volume of buying continued to get larger and larger which is indictive of a short squeeze as large positions began to close. The subsequent price action provided great consistent buying opportunities for traders. 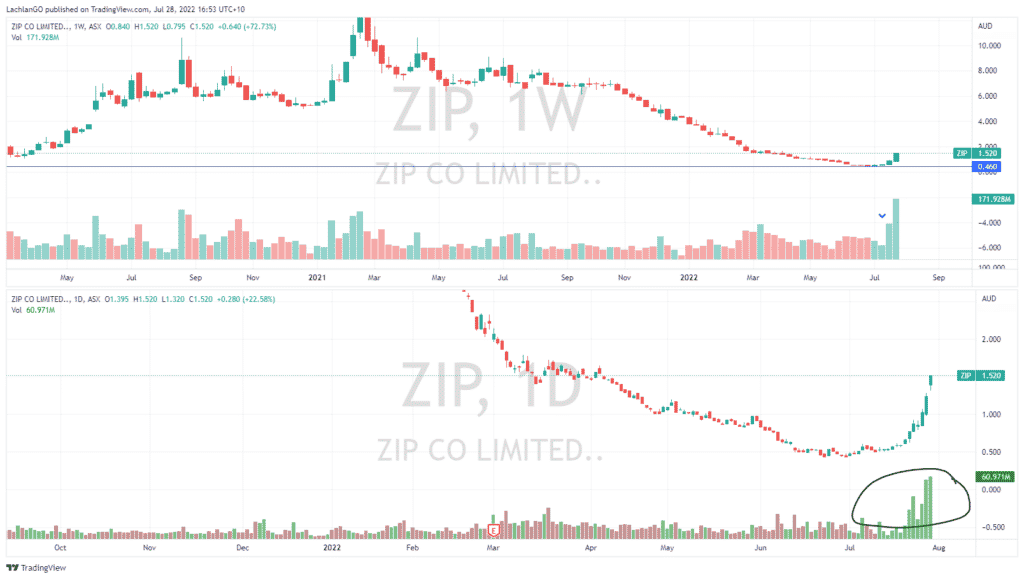 US dollar drops as the economy shrinks by 0.9% for the last quarter.

US economic data revealed last night shows that the country’s GDP has shrunk by 0.9%, although some are remaining positive that a recession may still be avoided. Despite the worrying figures, Federal Reserve Chair, Jerome Powell, outlined his belief that due to low unemployment figures of 3.6% and a strong market for jobs with 11 million job open...

Mastercard Incorporated (MA) reported its latest financial results before the opening bell on Wall Street on Thursday. The US financial s...