The Hong Kong protests have reached a point where it is threatening the “one country, two systems” that exists between the special international financial hub and the mainland.

It started with demonstrations against the extradition bill which later turned into a movement against the Hong Kong’s government. Millions marched through the streets, groups stormed through government buildings and protesters also brought the city’s international airport to a standstill for two days.

Months of unrest is now taking a toll on the city’s economy. Hong Kong is one of the world’s busiest business locations, and by crippling the airport and the city, companies operating in the financial hub are experiencing some serious disruptions.

Does China need Hong Kong to stay as it is?

The autonomy given to Hong Kong back in 1997 when China regained control of the city was mostly respected because China needed the city to remain as it is:

“The financial centre of China”

The three months of protests forced traders to reassess China’s stance and dependency of Hong-Kong. Back in 1997, China was not part of the World Trade Organisation (WTO). After a lengthy process of negotiations and significant changes to the Chinese economy, China became a member of the WTO. It means that China no longer has to rely on Hong Kong to get access to the global trade market.

In 1997, the special status given to Hong Kong benefitted the mainland economy.

However, when we look at the GDP figures over the years, we can see that Hong Kong’s economy relative to China has fallen from 18% to less than 3%. 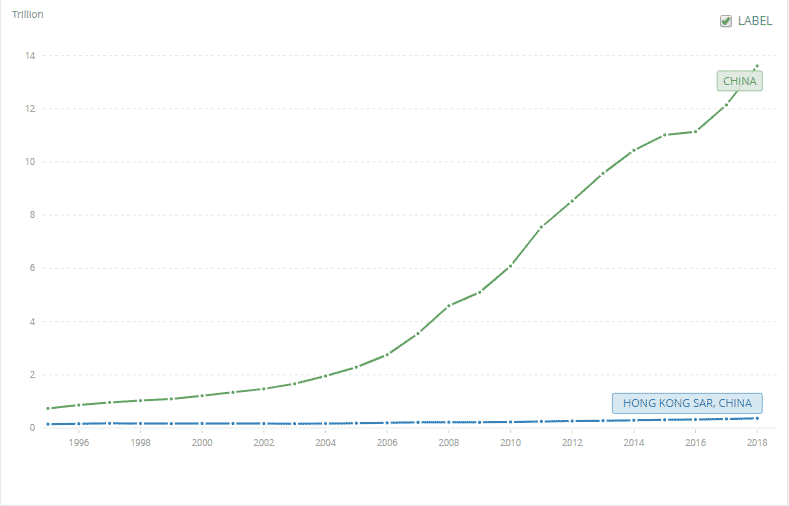 China has undergone enormous economic growth over the years and also launched a series of policies to expand its expansion. In terms of growth engines, Hong Kong has been lagging.

However, GDP figures alone may not be a good indicator to assess the appeal of Hong Kong relative to China. 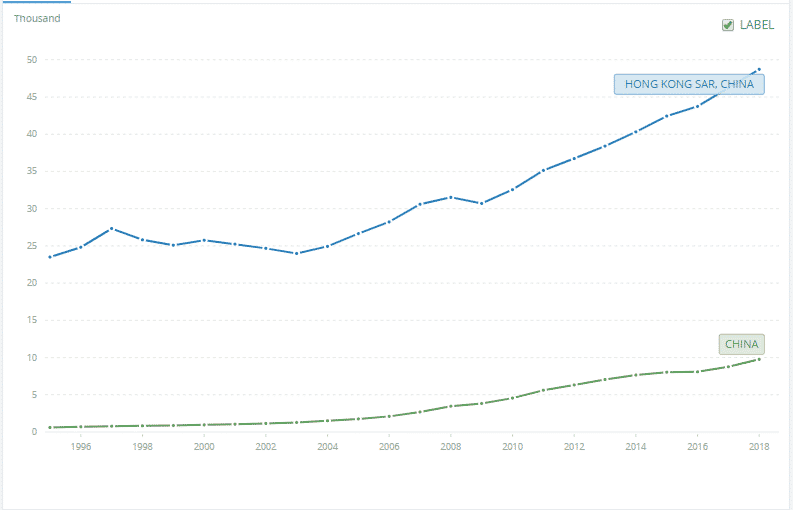 Rather than monitoring the economic size, it is more meaningful to use the GDP per capita as an indicator of economic performance to make cross-country comparisons of average living standards and economic wellbeing. GDP per capita is a straightforward division of the total GDP by the population.

The gap in the social, political, cultural and educational development between the city and the mainland is also probably what makes Hong Kong stands out in Asia.

Impact of the Protests

As Hong Kong battled one of its worst political crises in decades coupled with an escalation of a trade war between the US and China, fears of an immediate recession in Hong Kong are crippling the markets. On Wednesday, it was reported that the private sector activity plunged to a decade-low in August. The Manufacturing PMI has recorded a decline in the last 17 months.

Hong Kong stocks experienced a sharp pullback over the months. The sell-off sparked by trade tensions were exuberated in Hong Kong due to the protests. Retail, Property and Casino stocks were among the worst performers after the rallies caused major disruptions to the international airport and transport networks.

After weeks of unrest, Carrie Lam offers to withdraw the controversial extradition bill in an attempt to bring some calm. Hong Kong stocks bolstered higher and the MSCI gained by over three standard deviations on Wednesday.

The Property Index led the gains with nearly 7.5% rise following the announcement on the offer to withdraw of the extradition bill.

The Hong Kong Dollar has been pegged against the US dollar for decades. The peg has been pretty resilient over the years and has survived a few financial crises. However, the currency is now faced with:

The Hong Kong Dollar is pegged in a tight range of around HK$7.75 – 7.85. The HKD peg helps in preserving confidence and reducing foreign exchange risk. Investors are comfortable with the peg as it is much more robust in withstanding currency attacks. 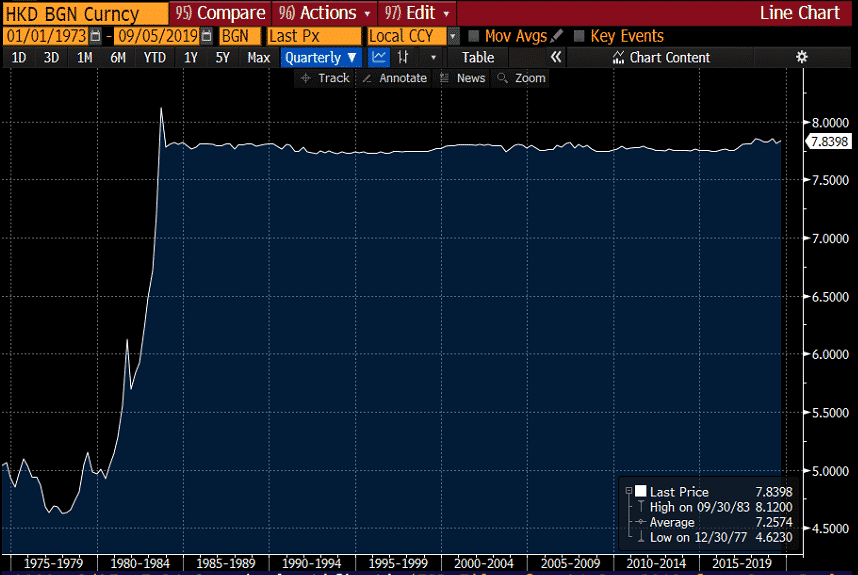 However, amid the global headwinds, the HKD appear to be weakening this year but it is unlikely that the currency will trade significantly outside the currency’s range. The central bank will buy local dollars if it gets too weak and sells to curb excessive strength. 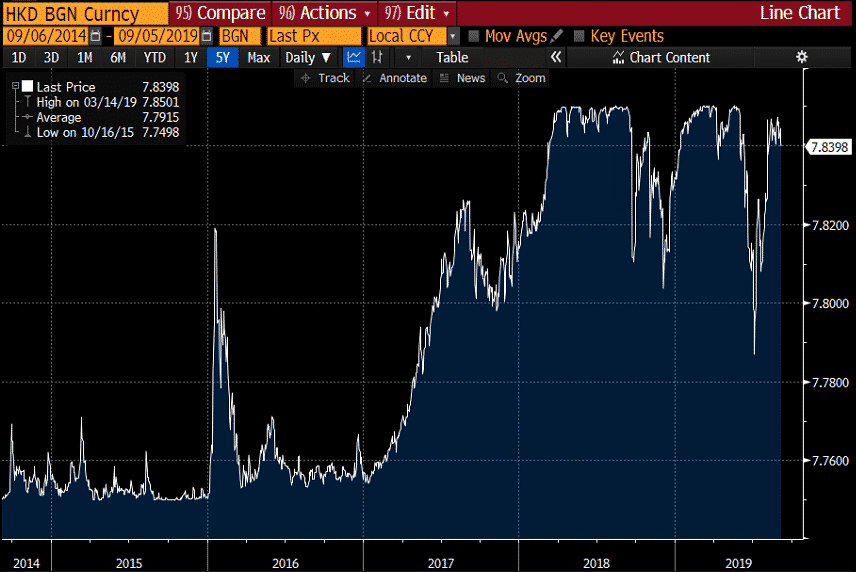 Overall, it is a solid currency peg which is shielded from the current turmoil.

China has refrained from intervening despite threatening to do so as the city remains an important gateway and stable financial centre for China. Beijing considered Shenzhen as the “next” Hong Kong given its strategic location and proximity to Hong Kong.

However, in the near future, no other Chinese city appear to be able to immediately step in the role of Hong Kong’s city.