This week is set to be another busy one in the United States with some of the world’s largest companies including Apple, Microsoft, Alphabet and Facebook set to release Q2 financial results. First up, it’s Tesla: the world’s largest electric vehicle maker reported their Q2 numbers after Monday’s closing bell.

Tesla posted solid numbers in the second quarter of 2021, beating expectations for both revenue and earnings per share. Total revenue was $11.96 billion in Q2 vs. analyst forecasts of $11.30 billion. Earnings per share were reported at $1.45 per share vs. $0.98 forecast.

”In the second quarter of 2021, we broke new and notable records. We produced and delivered over 200,000 vehicles, achieved an operating margin of 11.0% and exceeded $1B of GAAP net income for the first time in our history.” – Tesla said in a statement following the latest earnings report.

”Supply chain challenges, in particular global semiconductor shortages and port congestion, continued to be present in Q2. The Tesla team, including supply chain, software development and our factories, worked extremely hard to keep production running as close to full capacity as possible. With global vehicle demand at record levels, component supply will have a strong influence on the rate of our delivery growth for the rest of this year.”

”We successfully launched Tesla Vision in Q2, which was mainly possible due to our ability to use data from over a million Tesla vehicles to source a large, diverse and accurate dataset. Solving full autonomy is a difficult engineering challenge in which we continue to believe can only be solved through the collection of large, real-world datasets and cutting edge AI.”

”Public sentiment and support for electric vehicles seems to be at a never-before-seen inflection point. We continue to work hard to drive down costs and increase our rate of production to make electric vehicles accessible to as many people as possible.” 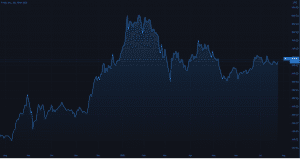 Tesla shares rose by around 2% in after-hours trading following the latest financial results. The share price is up by 113% in the last year alone, trading at $657.62 per share.

Coca-Cola, Johnson & Johnson and Verizon Q2 results are in

The earnings season in the US is heating up. On Wednesday – Coca-Cola, Johnson & Johnson and Verizon reported their Q2 earnings before the marke...