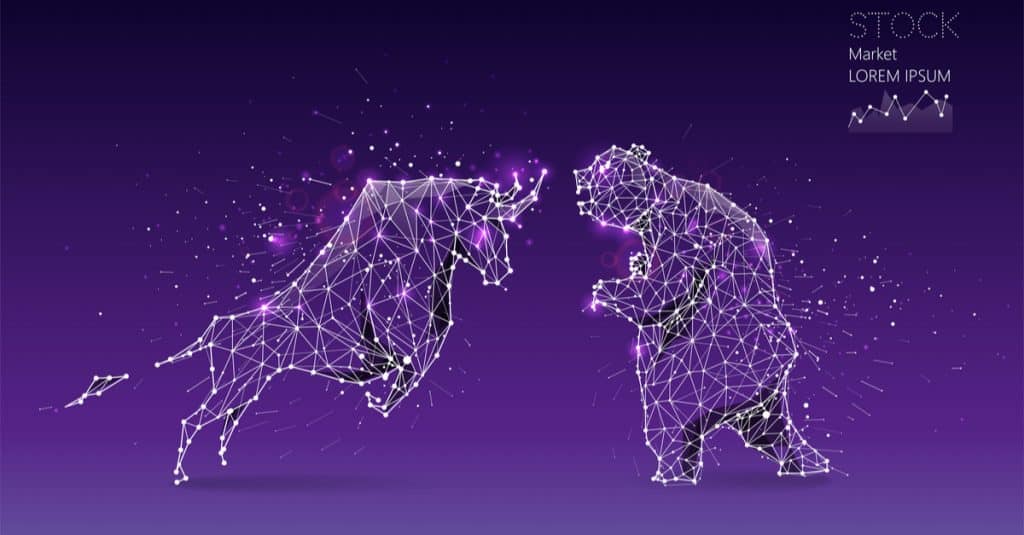 October took the equities markets on a rollercoaster ride. Investors’ sentiment is vulnerable as a series of bearish facts engulfed the markets. Various headwinds are hitting the stock markets and reviving fears creating some panic-selling. The presumption that a correction is due soon is also weighing on investors’ minds and is, in turn, installing a feeling of caution which is evidenced by the rise in the CBOE Volatility Index and the elevated levels of risk aversion. A glance at the screenshot below depicts that the equity markets have its worst month since 2008 and most major benchmarks have erased this year’s gains. 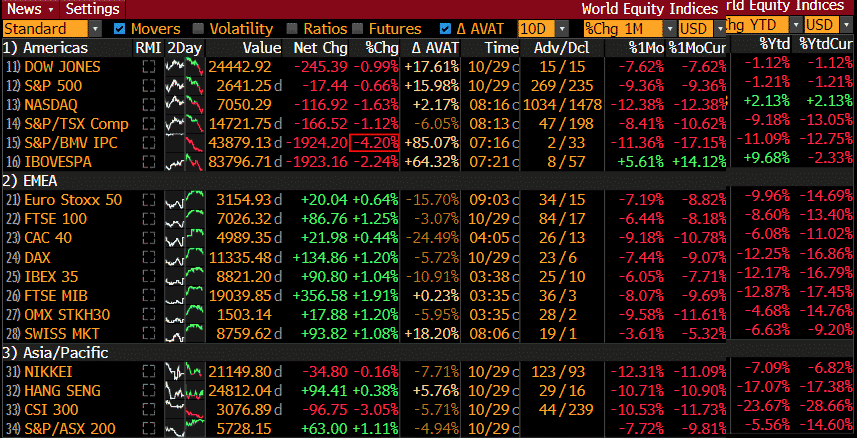 The vulnerabilities in the Asian and Emerging markets are worrisome. We have seen that the Chinese government decided to take action this month to stimulate its stock market which has brought some optimism in the Asian markets. However, the lift in sentiment was short-lived as fundamental issues persist. The US-Sino trade war and the intense deleveraging campaign are the most significant headwinds that drove the Chinese stocks in a bear market this year. China has seen a prolonged credit boom since the GFC and policymakers began to rout out the uncertainties associated with debt-fueled investment by deleveraging. Investors are concerned about how China will balance deleveraging versus growth as deleveraging could deepen the debt crisis.

Brexit and the Italian budget dispute are casting clouds of uncertainties over the European stock markets not to mention that trade tensions are still hanging in the background. Compared to the US, European equities have been pretty dull as aside from political uncertainties, there is a lack of dynamism and underperformance of profits.

As I mentioned in my previous articles, we have seen that the US markets have been more resilient given that the US economy is strong and corporate earnings have been robust. Despite the potential and optimism in the US stock markets, there are a few challenges that investors need to weigh-in:

However, as the reporting season gathers pace in the third quarter, investors are increasingly worried that the earnings growth has peaked. Companies like Caterpillar and 3M Co. tackled the rise in expenses arising from increasing borrowing expenses and costs pressures from protectionism measures by charging higher prices. The fact that Caterpillar maintained its earnings forecasts instead of increasing it like the two previous quarters cast some pessimistic views over the earnings outlook. Investors are less convinced that they can eke out gains from the earnings season amid the current risks as they are concerned that earnings growth might have reached a peak.

As we end what was a very volatile month for equity markets decade-long bull-run, slow earnings growth and conservative forecasts appear to be the bearish drivers that could send the markets into a correction.

Currency Markets: The rout in the equities markets is also affecting the sentiment in the FX markets.

Trade tariffs, Brexit, EU/Italy Budget dispute and concerns about the emerging markets have been driving the markets. With the stocks falling and the US dollar enjoying the safe-haven flows, traders are keen to see how the Fed will respond to the market selloff.

The Italian budget has been making headlines and investors are concerned about the fiscal position of Italy. After the European Commission officially rejected the Italian Budget draft, traders are gearing up for more heated or fierce resistance from Italy to revise and resubmit its plans. Traders should also keep a close eye on any spike in the Italian bond yields. We expect to see the Euro gripped by budget tensions with the only potential support coming from GDP and CPI figures before the month ends.

Brexit has undoubtedly been the primary driver for the Pound. We saw some significant swings following contradictory Brexit headlines. There are no signs of any solution for the Irish border on the horizon as October comes to an end. Aside from the BOE’s interest rate decision during the fourth week of October, we can see that the local currency will remain dampen by Brexit related uncertainties.

Falling stocks combined with a hawkish Fed is bolstering the strength of the US dollar against most peers. The later found support as a safe-haven amid concerns over corporate earnings, geopolitical tensions, and global growth. Any developments in the US equity markets will be the main focus for the foreign exchange market. The month of October swayed from risk-off and risk-on mood, and in times of uncertainties, we have seen traders seeking safe-havens like Japanese Yen. Sentiment has been edgy, and as negative market forces keep growing, investors will continue to seek safer assets.

After jaw-dropping gains in 2017, this year is a tough year for investors! Risk spectrum has changed and after the GFC, markets appear to panic when the markets sell. It could be paranoia or an overreaction that is making traders interpreting a correction as a recession.

As the month comes to an end, the mid-term elections in the US will take centre stage and could be a game changer.

This Friday will see the release of Non-farm payrolls (NFP) which normally triggers strong volatility across the forex board. The NFP represents the number of new jobs created during the previous month in all non-agricultural business. The September figures came way below expectations at 134k instead of the expected 185k due to the Hurricane...

Oil – Can Basic Economics Be Responsible For An 11% Decline?

On the back of what has been a pretty punishing month for Oil, now trading below $70 a barrel for WTI crude, we’re going to take a look at Oil, the...