Netflix reported their Q2 earnings after the closing bell on Tuesday.

”Revenue growth was driven by an 11% increase in average paid streaming memberships and 8% growth in average revenue per membership (ARM). ARM rose 4%, excluding a foreign exchange (FX) impact of 1 +$277m. Operating margin of 25.2% expanded 3 percentage points compared with the year ago quarter. EPS of $2.97 vs. $1.59 a year ago included a $63m non-cash unrealized loss from FX remeasurement on our Euro denominated debt.”

”The pandemic has created unusual choppiness in our growth and distorts year-over-year comparisons as acquisition and engagement per member household spiked in the early months of COVID. In Q2’21, our engagement per member household was, as expected, down vs. those unprecedented levels but was still up 17% compared with a more comparable Q2’19. Similarly, retention continues to be strong and better than pre-COVID Q2’19 levels, even as average revenue per membership has grown 8% over this two-year period, demonstrating how much our members value Netflix and that as we improve our service we can charge a bit more.” – Netflix said in a letter to shareholders following the announcement. 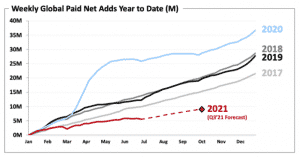 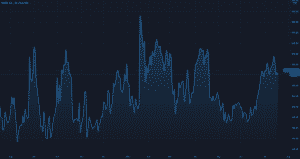 The share price of Netflix was little changed at the end of the trading day on Tuesday, down by 0.25% at $531.05 per share. The latest numbers did not have much of an impact on the stock in the after-hours trading either – up by 0.78%. Netflix is up by around 5% in the past year.

Coca-Cola, Johnson & Johnson and Verizon Q2 results are in

The earnings season in the US is heating up. On Wednesday – Coca-Cola, Johnson & Johnson and Verizon reported their Q2 earnings before the market open. Let’s take a closer look at the numbers. Coca-Cola The Coca-Cola company posted solid numbers in the second quarter of the year, beating analyst forecasts. The total revenue came in at...

It is set to be another busy week over in the US with major companies, including Netlfix, Coca-Cola, Intel, Twitter, Snap and American Express set to ...