Equities see-saw as Fed spooks then calms the market, US Dollar surges

June was a rollercoaster ride for world markets with inflation concerns and the major Central banks’ response to these driving big moves in FX, Equities, and commodities.

Major world indices mostly rallied in June with US indices the S&P 500 and NASDAQ finishing the month strongly to set new all-time highs. European and UK markets moved strongly to the upside on continued ECB and BoE dovishness, while Asia/Pacific was more mixed with Australia’s ASX 200 outperforming.

Equity volatility was low for the first half of the month, as investors waited to see how the US Federal Reserve would react to recent record inflation figures in their closely-watched June meeting. The Fed surprised markets with a hawkish pivot, bringing forward their forecast of when they expect to start normalising rates. This caused a surge in the US dollar and a sharp two-day sell off in equities, with investors contemplating the end to easy money policies.

Central bank chiefs in Europe, the UK and the US calmed the markets in the following week with testimonies and speeches assuring investors that QE and low rates were here to stay a while longer. This caused a reversal of the previous week’s sell-off and saw equities bouncing back with the S&P 500 and NASDAQ setting all-time highs, leaving global stocks poised to close out their fifth quarterly advance.

The Greenback outperformed all major currencies In June. With the hawkish turn from the US Federal Reserve and continued concerns inflation is not as ‘transitory’ as the Fed’s narrative suggests, a resurgent US dollar powered to be within striking distance of its highest monthly gain since July 2020.

After spending the first half of the month testing its support levels at around 90, the US Dollar index surged after the conclusion of the FOMC meeting, as FX traders positioned themselves for a higher future US interest rate sooner than previously expected. The gains were retraced somewhat after the Fed’s effort to calm the markets saw the drop in equities turn around. Friday’s Non-Farm Payroll figure will be the next big test of where the US dollar will be heading in the short/medium term.

The Aussie dollar was finally able to break the trading range it’s been stuck in for 2021, with a major break below the lower support of around 0.76 US after the hawkish Fed statement gave the USD a boost.

Old support levels of 0.76 – 0.77 US are likely now to act as resistance putting a cap on any AUDUSD rise, at least until the RBA meets next month. Any unexpected RBA policy statements, whether hawkish or dovish, could be the catalyst for the next big AUDUSD move. 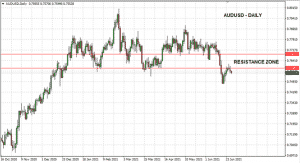 Gold (XAUUSD) is heading for its biggest monthly drop since 2016 on the Fed’s Hawkish shift. The rise in U.S. stocks to a fresh record and a resurgent US dollar have also weighed on the gold price this month.

XAUUSD has found some support in the 1775 USD per ounce area where the Fed’s hawkish shift seems to be priced in. Traders are now focusing on the timing of when policy makers may start dialling back stimulus. 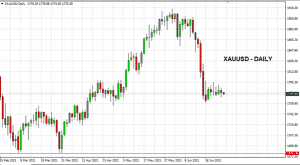 Early in June at the OPEC-JMMC meeting, the oil cartel announced it was sticking to its existing plans to gradually ease oil output cuts in June and July. With a background of rapidly increasing demand as the world’s economies reopen and supply remains constrained, June saw a very strong month with WTI crude up 10% for the month despite this week’s pullback. There may be some pressure on oil prices next week with another OPEC+ meeting scheduled and increasing concern about the COVID Delta variant spread putting economies in lockdown again. 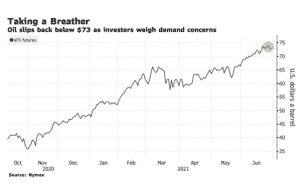 JPMorgan and Goldman Sachs Q2 numbers are in

JPMorgan and Goldman Sachs reported their Q2 earnings before the opening bell on Tuesday – both beating analyst forecasts. JP Morgan & Co JP Morgan reported total revenue of $31.4 billion in Q2, above analyst forecast of $29.90 billion. Earnings per share were reported at $3.78 vs. $3.21 estimate. ''JPMorgan Chase delivered solid per...

Equity Markets World equity markets staged a decent comeback last week after the shock of the US Federal Reserve’s hawkish pivot caused a sell off ...