April was a bumper month for world markets as major equity indexes across all regions rallied strongly. US markets smashed through all-time highs on strong corporate earnings, economic figures, and a supportive Central Bank.

Major world indices rallied broadly in April, with gains seen across the US, EU/UK and Asia.

Adding to the upward momentum was the plateauing of treasury yields and an accommodative Federal Reserve. In their April meeting, they indicated they were in no rush to raise rates or taper their asset purchase program.

April’s economic releases were also strong with employment, inflation and retail sales figures all pointing to an improving US economy.

A White House proposed doubling in the capital gains tax rate caused a bobble in the markets but was quickly shrugged off.

European markets also broadly rallied during April with the German DAX and Euro STOXX 50 both surpassing the all-time highs set in March.

Strong corporate earnings from EU banking giants such as Deutsche Bank and Banco Santander coupled with rapidly improving COVID vaccination rates have given European traders optimism that the EU economy is on track to bounce back as strongly as its US counterpart.

In its April meeting the ECB also struck a cautious and dovish tone, while the ECB struck an optimistic tone with the economic recovery, it gave no indication it was preparing to tighten fiscal policy, giving a further tailwind to EU markets.

The UK FTSE 100 hit levels not seen since the beginning of the COVID inspired downturn, reaching its highest levels since February 2020.

The UK has one of the highest vaccination rates in the world and lockdown measures are scheduled to end mostly in May and completely in June giving confidence of a sustained economic recovery. Strong figures released in April for Employment, Retail Sales and Manufacturing also bolstered the FTSE and the pound.

Exceptionally strong employment and retail sales figures along with a supportive RBA drove the ASX 200 higher as investors piled into the share market.

Prices for iron ore rose to above $190 per tonne, its highest level since March 2008 on robust demand, further supporting the equity market and AUD. 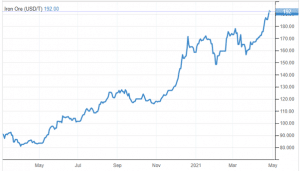 April saw the US dollar take a dive, the US Dollar Index slumped over 3% and is currently testing the 90 levels. All major currencies outperformed the US dollar with the Swedish Krona rallying almost 5% against the greenback. 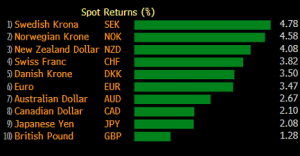 The US dollar index dropped over 3% in April. The run-up we saw in March due mostly to the rapid rise in treasury yields has been erased as yields plateaued and modestly dropped in April.

This, talk from the White House of trillion-dollar spending sprees and a Fed in no hurry to tighten rates or asset purchases weighed heavily on the US dollar index, seeing its worse month since July 2020. 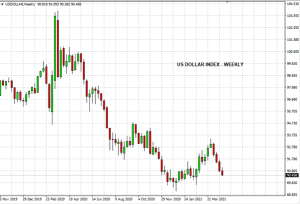 With a weak US dollar and stubbornly high commodity prices, AUDUSD made the full trip from the bottom of its 2021 range at around 0.76 US to the top of the range around the 0.78 level.

AUSUSD has experienced selling pressure around this resistance level in the recent past, a sustained break of the 0.78 US level could see AUDUSD make new highs for 2021. 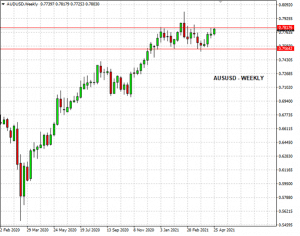 US Crude rallied around 8% in April, erasing March losses and approaching last month’s brief highs that were reached on the Suez Canal blockage.

The April OPEC-JMMC meetings concluded with delegates happy with the plans to ease the production cuts in May citing strong demand as the world economy recovers, Goldman Sachs researchers are predicting oil to hit $80 later in the year on increased demand and tight supply. 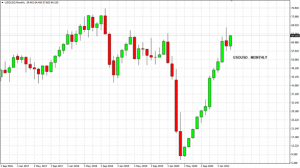 Week Ahead: US employment and the RBA headline a full economic calendar

Equity Markets US Indices took a breather on Friday, easing off all-time highs that were hit during the week on strong tech earnings. US earnings in the week ahead see a less cluttered calendar with only a handful of big names reporting on Tuesday, Wednesday and Thursday. Source: Interactive Investor The Australian market will see thr...

Equity Markets Wall St had another mixed and muted session as investors weighed up a slew of corporate earnings against the upcoming Federal Reserve ...